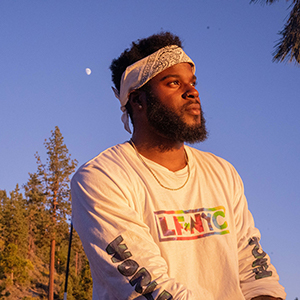 Ever felt lonely even while you were in a crowd?

This entrepreneurial student knows that many other people, particularly during these difficult times, have felt a similar sense of isolation. This inspired Wallace and his business partner, Lovans Florial to build a company to help individuals connect to the community through artist management/business services, events, festivals and fashion. The two met while they were growing up in Mount Vernon, New York.

The company, Lonely Floater, was a brand founded by Wallace and Florial in the fall of 2016. “The name was inspired by the harsh reality in which people are individually facing challenges that make them feel alone even when they are surrounded by people,” said Wallace, a senior management information systems (MIS) student in the Fowler College of Business at San Diego State University. “It’s evident that there are a significant number of people struggling to live and survive, at least with their sanity and stability intact. In our perception, these people feel like they are floating alone and, hence, the term ‘lonely floaters.’ My co-founder and I were once in such a position, but that did not hinder us from pursuing our dreams and constantly working on improving ourselves.”

The Brooklyn-born Wallace came to San Diego via the U.S. Navy, where he served for over nine years before he was was honorably discharged in 2021. He is pursuing his third academic degree at SDSU, having earned associates’ degrees at Central Texas College and San Diego Mesa College. He chose to attend SDSU to build his “knowledge and skill in business.” “Given the credibility and reputation of this institution, I saw an opportunity to be a part of a revered organization and better improve my ability in business,” he said. “Of particular importance was the need to be a beneficiary of the Lavin Entrepreneurship Center.”

“We lead by example in promoting social connectively, respect for individuality and the value of artistic expression.”

The Lavin Entrepreneurship Center was developed to serve students, entrepreneurs and business leaders through a blend of its entrepreneurial curriculum, workshops, internships, resources and events. The center has served as a source of funding and assistance to SDSU’s student entrepreneurs who are either exploring, or in the process of, establishing a small business.

Wallace said he learned about the center “the hard way” when he tried to register Lonely Floater’s trademark through an unscrupulous fiduciary company. He noted that the fiduciary kept their money, but did little to resolve the trademark issue. “Fortunately, I met an SDSU student who identified himself as a Lavin Entrepreneur and he was able to solve the issue that had been plaguing us for two years in a matter of two months,” said Wallace. “I realized that if some ‘college kid’ could do more for me than a paid fiduciary, I knew I needed to be a Lavin Entrepreneur too. I signed my acceptance letter into the Lavin Entrepreneur program before I enrolled at SDSU and to this day, I’m proud of that.”

As he determines the future of the Lonely Floater, Wallace does plan to stay true to the ideal of corporate responsibility. “Through community involvement, we have started our World Peace Project to donate to humanitarian agencies such as Doctors Without Borders and Colin Kaepernicks’ Know Your Rights Campaign to better enhance our stand on a positive global environment,” he said. “It’s not all about making memories and profits, but sustainability and humanitarianism as well.”

Big Plans for the Future

When Wallace graduates from SDSU in May of 2021, he said he plans to “further grow and develop Lonely Floater to become a household name in fashion and the management of events and artists. To do this, I plan to expand my network, collaborate with more worthy players, seek more investors, grow and improve our online presence, and take on programs and courses that will hone my skills and supplement my knowledge.” He also says the company plans to embark on a series of art and music festivals in the near future.

To other SDSU students who are considering the world of entrepreneurship, Wallace offers these words of advice and caution: "Entrepreneurism is not as easy or glossy as it may seem or as people may want you to believe, because it’s a daunting process. But despite the constant and potentially shifting challenges, you’d best believe that there will always be a way out — you just need to look hard enough and have all hands on deck. But it’s still worth the trials and the struggle because the rewards are fulfilling. You learn through the process and more opportunities are likely to open up over time.”