San Diego State University seeks a visionary academic leader to serve as the Thomas and Evelyn Page Dean of the Fowler College of Business.

The Dean will advance academic excellence in teaching and research, promote student success, cultivate connections with the business community, and foster equity and inclusion.

The Fowler College of Business is the recipient of one of the largest endowment gifts in the history of the university from Ron and Alexis Fowler, which uniquely positions the college to build on its successes and reach new heights.  Furthermore, the university has broken ground on SDSU Mission Valley, the once-in-a-generation development of a world-class university campus, innovation district, and multi-use stadium to serve higher education, the public good, and the community’s goals and aspirations, which complement the existing campuses in central San Diego and Imperial Valley.

About The Fowler College of Business

Ranked by U.S. News & World Report as a Top 50 national Undergraduate Public Business Program for 2021, the Fowler College of Business is composed of the Charles W. Lamden School of Accountancy and the departments of Finance, Management, Management Information Systems, and Marketing.

The college and its Lamden School of Accountancy are both accredited by the Association to Advance Collegiate Schools of Business (AACSB). The college has 6,332 students in various undergraduate degree programs, including its programs in international business and entrepreneurship which was ranked among the top 15 public undergraduate programs, and a growing online general business program. It also offers graduate programs leading to the MBA, Sports MBA, and MS in Accountancy, Management Information Systems, Cybersecurity Management, Global Business Development, and MSBA with a concentration in Financial and Tax Planning. The Fowler College prides itself on having a dedicated staff, world-renowned scholars, and committed educators who are all focused on student success and the development of ethical global business leaders and entrepreneurs.

Active centers and institutes in the college include: the Leonard Lavin Entrepreneurial Management Center, the Center for International Business Education and Research and its affiliated Center for Advancing Global Business, the Corporate Governance Institute, the Center for Integrated Marketing Communications, the Corky McMillin Center for Real Estate, and the Institute for Inclusiveness & Diversity in Organizations. The Financial Markets Lab (housing 12 Bloomberg Terminals) and the Artificial Intelligence Lab are also housed within the college. Click here to visit the Fowler College of Business homepage.

Are You the Right Fit?

Upon application, applicants will be prompted to provide basic contact information, a letter of interest, a C.V., and a statement detailing their commitment and/or contributions to equity, diversity, and inclusion through teaching, research and/or service. The position will remain open until filled; however, to ensure full consideration, applications must be received by Friday, January 29, 2021. Employment of the selected candidate is anticipated to commence by the start of the Fall 2021 semester, with a preferred starting date of July 1, 2021.

Ranked 65 among public universities in the U. S. News & World Report’s ranking for 2021 Best Colleges, San Diego State University is a Hispanic-Serving Institution residing on Kumeyaay land near the national border, offering bachelor's degrees in 97 areas, master's degrees in 84 areas, and doctorates in 21 areas, as well as programs at regional microsites and around the globe. SDSU is ranked 35 nationwide for ethnic diversity, and roughly 54% of the university's undergraduates and graduates are students from historically marginalized populations. In fiscal year 2019-20, SDSU faculty secured $144.4 million in research grant funding and university gift commitments totaled more than $127 million.

San Diego State University takes pride in 123 years of achievement in education, research, and service. At both the main campus in central San Diego and the campus in Imperial Valley, the university provides students with the opportunity to participate in an academic curriculum distinguished by direct interaction with faculty and an international emphasis that prepares culturally-competent global citizens, compassionate leaders, and ethical innovators who will transform the world. A Hispanic-Serving Institution located on Kumeyaay land near the national border, SDSU is ranked 65 among public universities in the U.S. News & World Reports rankings for 2021 Best Colleges, offers bachelor's degrees in 97 areas, master's degrees in 84 areas, and doctorates in 21 areas, as well as programs at regional microsites and around the globe. For Fall 2020, the university received more than 96,000 applications, and enrollment grew to 35,578 students.

SDSU diverse faculty are making meaningful contributions to the community and the world. The university is comprised of 850 tenured and tenure-track faculty and over 1,000 temporary faculty in the library and seven academic colleges: Arts and Letters, Engineering, Professional Studies and Fine Arts, Fowler College of Business, Education, Health and Human Services, and Sciences. In fiscal year 2019-20, SDSU faculty secured $144.4 million in research grant funding -- a total of 758 awards to 307 investigators.

The university strives for equity and inclusion in everything it does, building on the human and intellectual diversity of students, faculty and staff as a source of innovation and strength. SDSU is ranked 35 nationwide for ethnic diversity, and roughly 54% of the university's undergraduates and graduates are students from historically marginalized populations. SDSU is the No. 1 LGBTQ+-friendly campus in California, and No. 8 nationally, according to Campus Pride and BestColleges. ​Further, the university is consistently ranked as a top school for veterans​ and ​serves more than 4,000 military-connected students​. Most critically, the values of equity, diversity and inclusion translate to results: Continuation and degree completion rates have increased over the last decade, and equity gaps have begun to close.

A New Era: The Future of SDSU 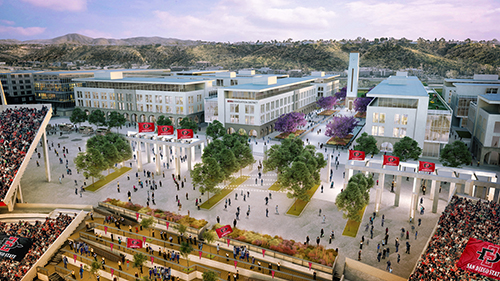 With the support of San Diego voters, the university broke ground on SDSU Mission Valley on August 17, 2020. SDSU Mission Valley is the once-in-a-generation development of a world-class university campus, innovation district, and multi-use stadium to serve higher education, the public good, and the community’s goals and aspirations. The former site of SDCCU (formerly Qualcomm) Stadium, SDSU Mission Valley is a 166-acre site in urban San Diego that is 2.5 miles west of the main campus and connected to it by light rail. SDSU Mission Valley will be a place of opportunity, knowledge, and engagement, and is projected to facilitate an increase of enrollment by up to 15,000 students over time and expand the university's annual regional economic impact of $5.67 billion by an additional $3 billion annually.

With over 400,000 living alumni and many more friends in the community who have a stake in its future, SDSU successfully engages supporters in initiatives that advance the broader San Diego region’s welfare and ensure student success.  In fiscal year 2019-20, university gift commitments totaled more than $127 million.  In 2017, the University completed its first comprehensive development campaign, which yielded more than $800 million in support of SDSU's excellence.

The five strategic priorities of the plan are:

SDSU will forge a path to become an R1 Doctoral University where excellence and access converge. To achieve this long-term institutional goal, SDSU will leverage its unique stature as a community-engaged, border-connected, Hispanic-Serving Institution (HSI) located on Kumeyaay land.

SDSU is committed to building a resilient and sustainable university through innovative practices.

SDSU will expand its global impact, unifying the university through a common mission and identity. Under a single name, the multi-campus university includes the San Diego campus, SDSU Imperial Valley, SDSU Global Campus, a future SDSU Mission Valley location, regional microsites, and other programs around the globe and online.

Equity and Inclusion in Everything We Do

SDSU will be a global leader in advancing diversity, equity, and inclusion in research, teaching and in community engagement

Students at Our Core

SDSU commits to a future where all students are able to achieve their greatest potential.

In San Diego's East County, the terrain varies from gentle foothills to mile-high mountains and the historic mining town, Julian, down to the 600,000-acre Anza-Borrego Desert State Park, offering nature-conscious visitors endless opportunities to hike, camp, fish, observe wildlife and much more. In San Diego's North County, the agricultural community produces quantities of flowers and magnificent produce. Wine growers are also making a mark by growing and harvesting quality grapes that become excellent wines, which are served at some of the most elegant restaurants and resorts in the region. Along the west, 70 miles of Pacific Ocean coastline not only supports year-round outdoor recreation, such as surfing, boating, sailing and swimming, but also important scientific research at the Scripps Institution of Oceanography. To the south, it's a whole different country, Mexico, featuring its own cultural offerings in various towns along the border and coastline, including Tijuana, Rosarito and Ensenada.

Forbes called San Diego “America’s Coolest City”, and it’s easy to see why. This is a paradise for the young and the young at heart. With an average age of just 35, San Diegans have created a mecca for adventure seekers who expect just a little more from life. If your idea of a great time involves perfect weather, great food, craft beer and a vibrant arts scene, you will find it here, in addition to spectacular surroundings and some of the best beaches in the world.

You can’t mention San Diego without talking about its phenomenal outdoor lifestyle, much of which has a lot to do with the fact that it lies at the southwestern tip of the US, right along the coast of the Pacific Ocean. This is matched by its fantastic year-round weather, with the temperature rarely dropping below 16°C or soaring above 25°C. The fact that you can surf, snorkel, boat and paddle all year makes it a must visit destination for any Canadian that might have been a fish in another life!

The person holding this position is considered a mandated reporter under the California Child Abuse and Neglect Reporting Act and is required to comply with the requirements set forth in CSU Executive Order 1083 as a condition of employment.