As part of San Diego State University’s President’s Lecture Series in conjunction with the Charles W. Hostler Institute on World Affairs, Shaikh Abdulla bin Rashed Al Khalifa, the Ambassador of the Kingdom of Bahrain to the U.S., spoke to the students, faculty, staff and the community during a virtual SDSU webinar on November 19, 2020. Ambassador Al Khalifa discussed the history of the diplomatic relationship between Bahrain and the U.S., and the recent signing of the Abraham Accords, which normalize diplomatic relations with Israel.

The Charles W. Hostler Institute on World Affairs was founded in 1942 to provide students, faculty and the public with information on intellectual engagement on global affairs. The Institute is currently housed in the Center for Advancing Global Business at SDSU’s Fowler College of Business.

Introduction
Bruce Reinig, the interim Thomas and Evelyn Page Dean of the Fowler College of Business, served as the event moderator. The dean opened the lecture by introducing the president of SDSU, Adela de la Torre who shared a brief history of the Charles W. Hostler Institute on World Affairs. De la Torre then introduced Chinyeh Hostler, alumna of SDSU’s Charles W. Lamden School of Accountancy, and widow of Charles Hostler, who served as the U.S. ambassador to Bahrain during the Gulf War in the early 1990s. Mrs. Hostler provided the audience with a brief overview of her late husband’s role in installing a U.S. Naval base in Bahrain and his promotion of trade, investments and tourism in the country.

History of Bahrain/U.S. Relationship
Ambassador Al Khalifa began his lecture with an overview of the diplomatic and historical relationship between Bahrain and the U.S. “Although our formal relationship only dates back to 1971, the story of our two lands goes back over a century ago when Christian missionaries came to Bahrain in the 1880s and established a medical facility which would grow to become the American Mission Hospital that is still in operation today,” said the ambassador.

He went on to explain how Bahrain “actively harbored Jewish citizens from throughout the region, providing shelter and safety as they were having a hard time finding a home in the region.” Ambassador Al Khalifa discussed the signing of two trade agreements in 2006 and 2017 between Bahrain and the U.S., saying the most recent agreement added: “up to $11 billion worth of trade deals in different industries and, maybe that number is not big, but it’s half our GDP.”

The Abraham Accords
During the question and answer session, Ambassador Al Khalifa addressed the signing of the Abraham Accords in which the U.S., Israel, the United Arab Emirates (UAE) and the Kingdom of Bahrain signed a historic agreement establishing diplomatic relations between Israel, the UAE and Bahrain. “We’re very hopeful and we’re very optimistic that in the days, months and years to come, we will establish stronger relations, leading to peace,” he said. “Not only in the immediate region but also creating a ripple effect for the other parts of the worlds as well.” The ambassador referenced Bahrain’s Jewish citizens by saying “Bahrain is one of the only countries in the region that has always had an indigenous Jewish community living harmoniously within the society.”

Ambassador Al-Khalifa discussed how the Abraham Accords (so named since Christians, Jews and Muslims are said to be descendants of Abraham), signed on September 15, 2020, would establish embassies in Bahrain and Israel, airline transportation between the two nations, and a visa process that would lift travel restrictions. 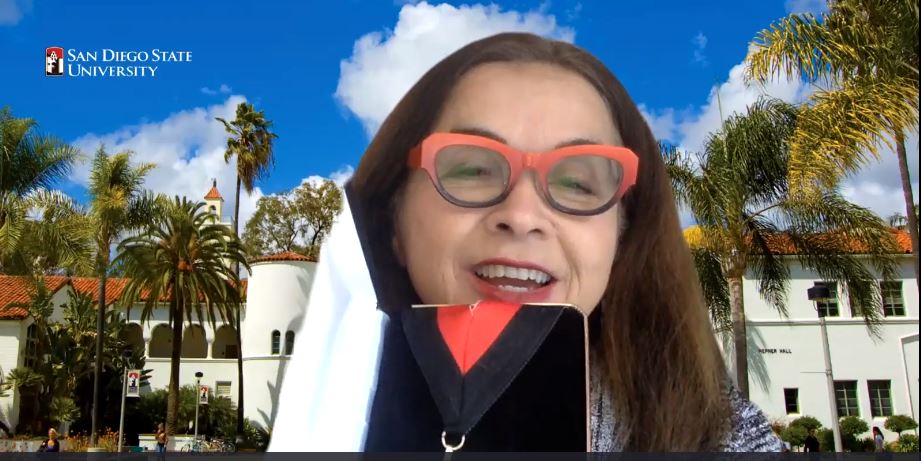 When asked why it was important for the U.S. to play a significant role in the process, the ambassador replied “it was important for the U.S. to play an integral role because this is an introduction to both the peoples of Bahrain and Israel”. “With the establishment of relations with Israel, it was important to have a country like the United States help us all work together to bring people closer and to smooth out any issues, especially in the early stages, and we do trust that we are off on the right foot.”

“The Sky’s the Limit”
Ambassador Al-Khalifa shared his viewpoint on international business career opportunities and concluded the lecture by telling students in the audience that with more free trade agreements and the advancement of artificial intelligence, “the sky’s the limit” for those aspiring to pursue careers in the field of global trade.